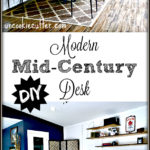 Hello all!  Yesterday I revealed the home office makeover I’ve been working on for months and today I wanted to share with you how I built the massive modern desk I designed.  My husband previously had a L shaped desk and has mentioned to me numerous times that he wanted a “U” shaped desk.  Of course, this presented itself as a challenge to me, so I had to make it happen.  Take a gander through the project, but don’t worry I’m having some plans drawn up soon.  Until then if you have questions ask away! 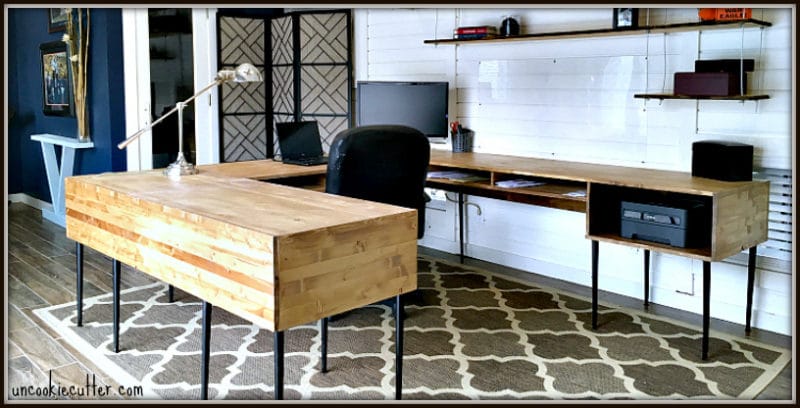 When I say “modern desk”, I mean I wanted it to have a 60ish, Don-Draper-y sort of feel.  I was inspired by this amazing desk from my friend Iris Nacole.  After deciding on the shape and style I talked to my husband about drawers and cabinets.  Since his last desk looked like this all the time, he thought the cabinets and drawers were just places for things to collect and not be seen.  So, he decided he didn’t want any.  I did construct the top in a way that would allow for a drawer to be added later in case he changes his mind on this one. 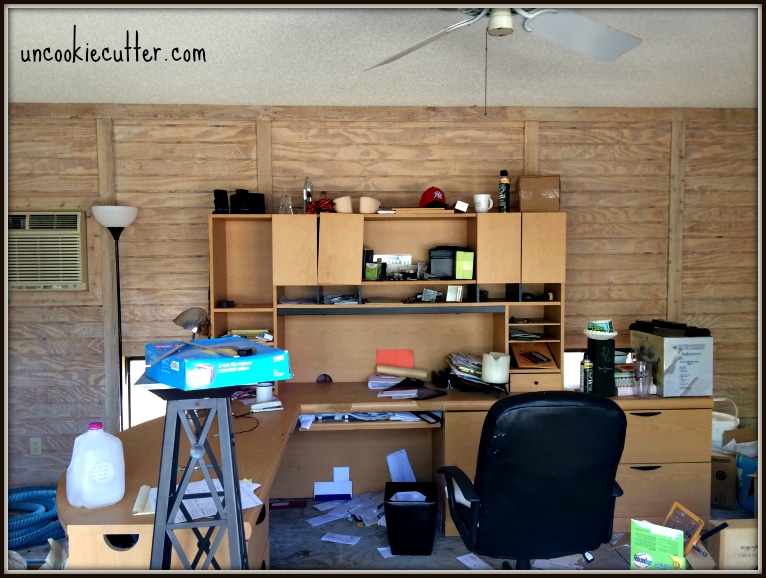 I’ve used this craft board before on my home bar build and I love it, so I decided to go with it again. It’s constructed with a beautiful grain that makes it easy to get that butcher block look even if you don’t have the equipment to make it yourself.  I love that the strips of wood are all a little different and it’s super smooth, but you can still see some grain and knots.  Plus the edges look a lot nicer than plywood. 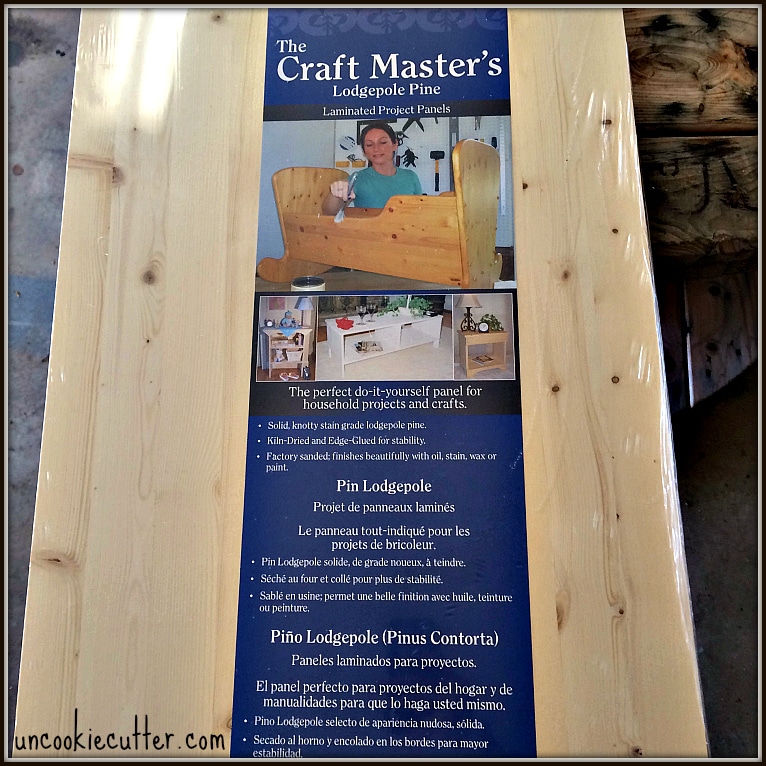 I started by  measuring the space and finding the biggest sized boards I could find that would fit.  I laid them out in a way that looked like it was going to work, allowing enough space for the chair to swivel around in the middle.  I thought the front side could be a little smaller and the back a little longer, just to give it a little more interesting look. 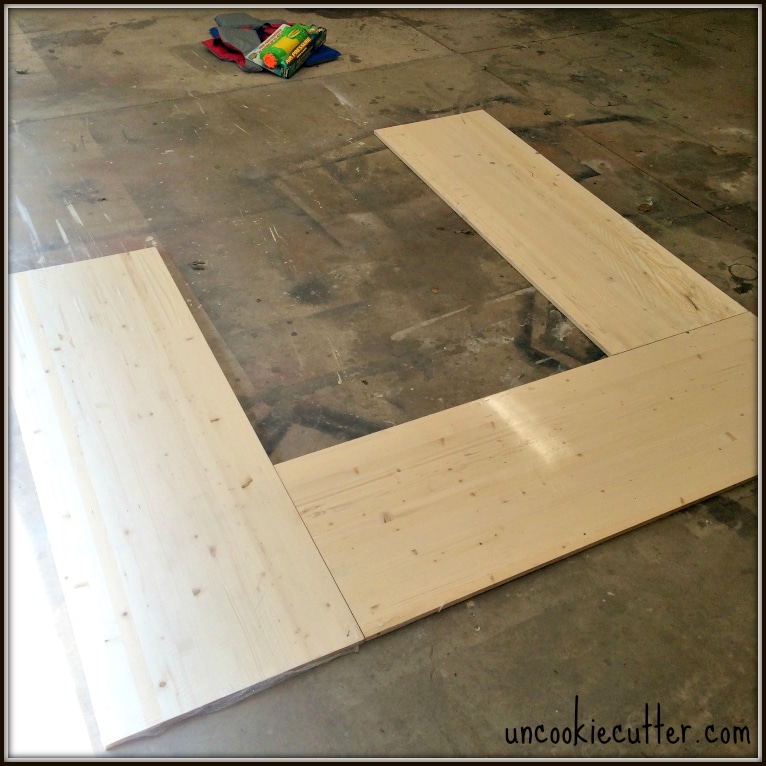 I wanted the front to have that thick, box-y look so I originally thought I would do this with thick cubby-like shelves underneath.  But, once I got to thinking about it, I thought 12″ might be too much for the space between your knees and the top of the desk.  I started reading online and I was right, the distance needs to be 5″ at most.  So, I decided to leave a longer space on either side and raise the middle up a bit.  This way, he still has room to stack his papers and journal articles. 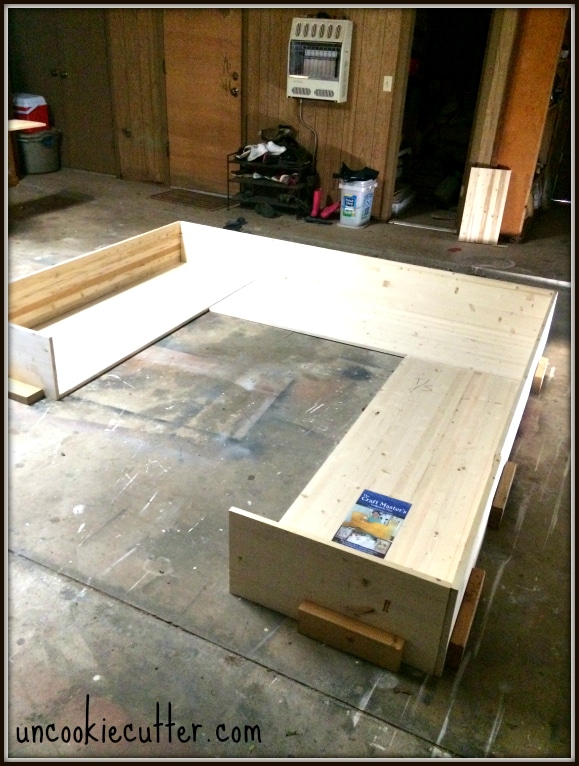 I constructed it all using a bunch of pocket holes wood glue.  Have I mentioned I love my Kreg jig? Like I said before, Jamison from Rogue Engineer is going to be writing up some plans for this desk soon, so I’ll update then! 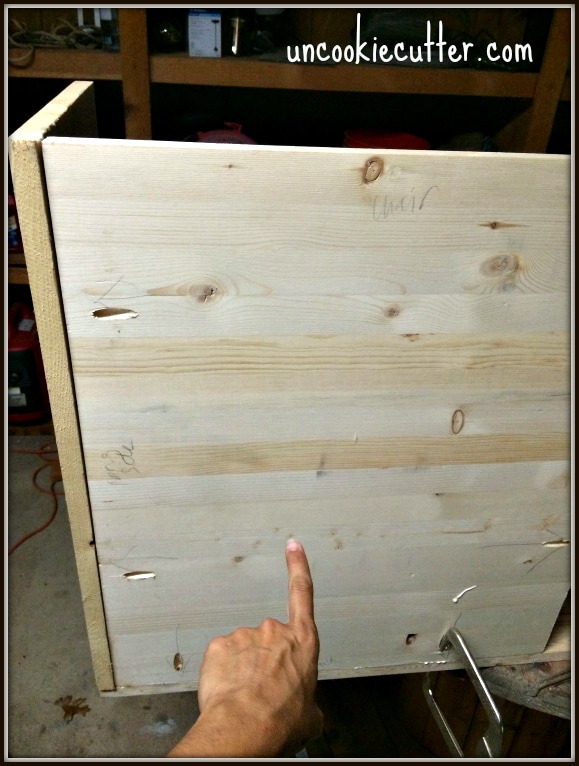 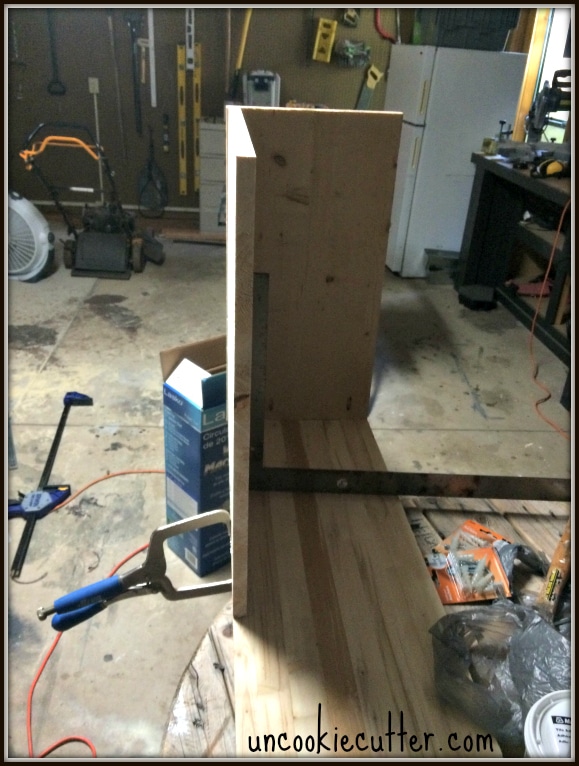 I used a 2×4 under the shorter part to add some support. 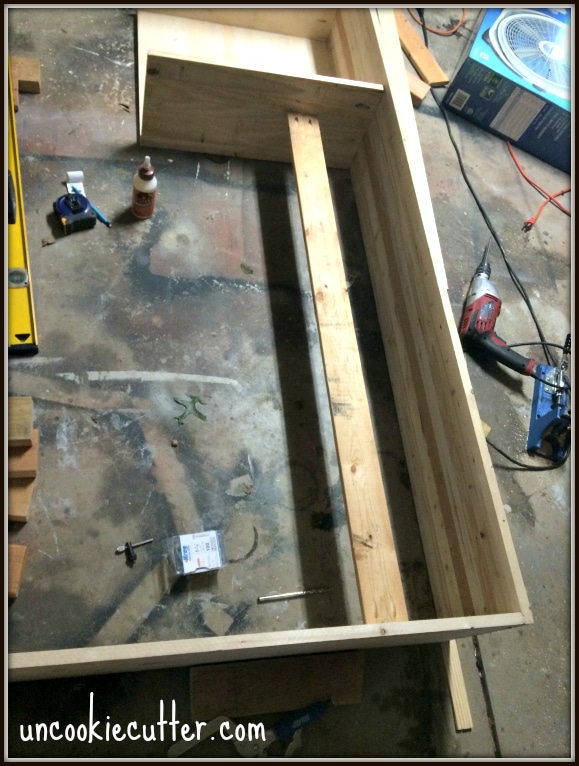 Next I attached the bottom shelf of the shorter part. 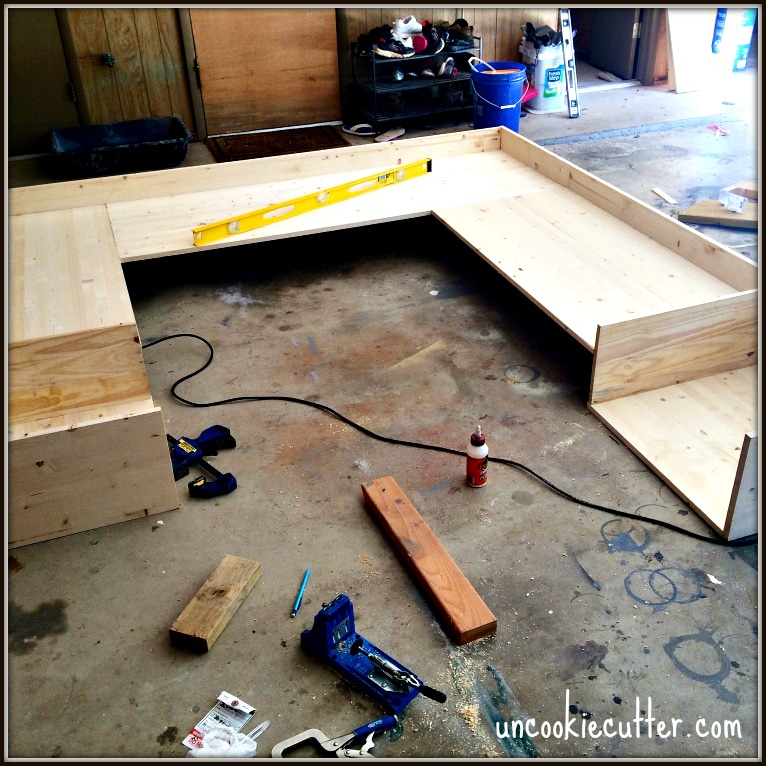 Then I basically just laid the top on using pocket holes hidden underneath. I actually had trouble getting into the tight little space.  In hindsight, I would build this whole desk upside down.  But, since I was sort of figuring it out as I went, I had to work it out. I ended up getting a flexible drill bit holders to get back into the areas the drill was too big to get into.

Then I added some boards to give it a little more support.  I cut the boards a little shorter to allow the cords from the computers to run inside the desk, but behind the support boards.  I also thought these little support boards would be perfect if I wanted to add a drawer in later. 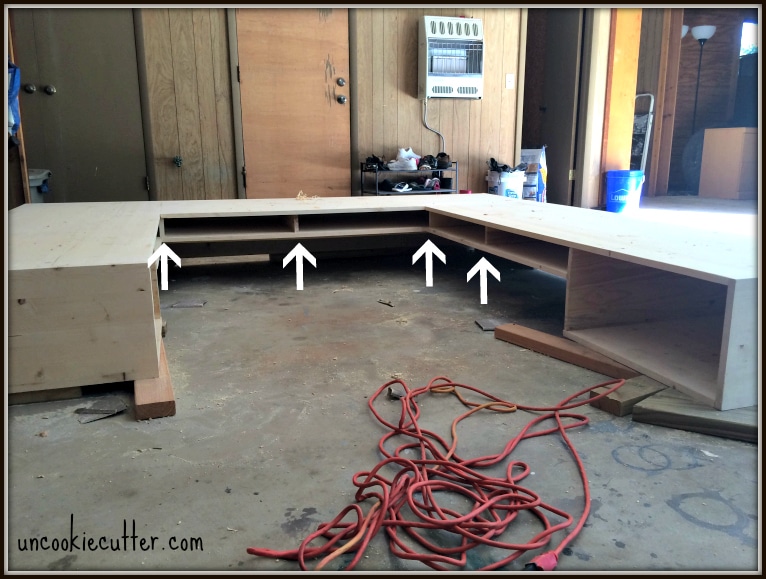 The last thing I did before staining was that I added some holes along the back side to hide all the cords from the monitors and lamp.  I hate seeing cords. The cords now run down into those holes and behind the supports I added in the last step. I also stained it in Minwax Special Walnut. 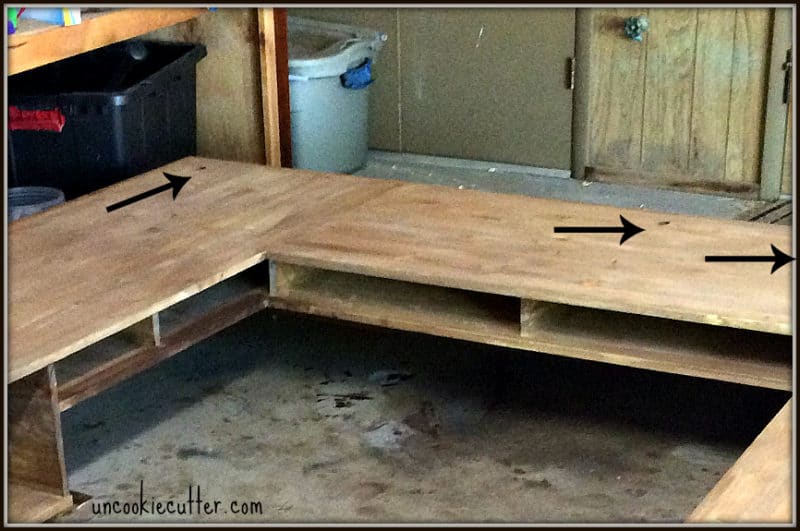 Next, it was time to add the legs.  I thought hairpin legs would look cool and help me achieve that modern desk look, but since I needed a lot of legs to hold this massive thing up, I couldn’t find any hairpin legs I could afford.  So, I went with these some cheap wood legs. A lot of them – 14 to be exact! 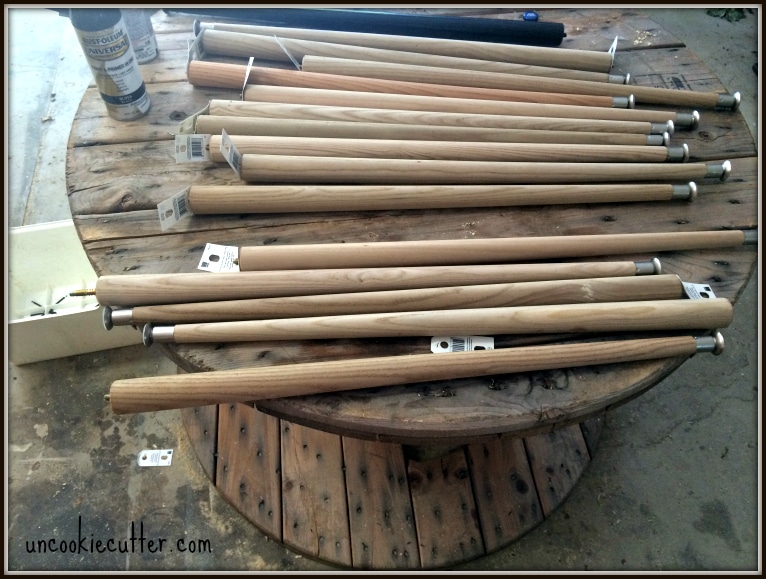 I also bought some cheap attachment plates, and attached them to the bottom.  I used 4 under each of the longer ‘cubby” spaces on both end.  I put three legs in each of the other two corners.  This is supportive enough, but still lets him roll all the way around in his chair under the desk. 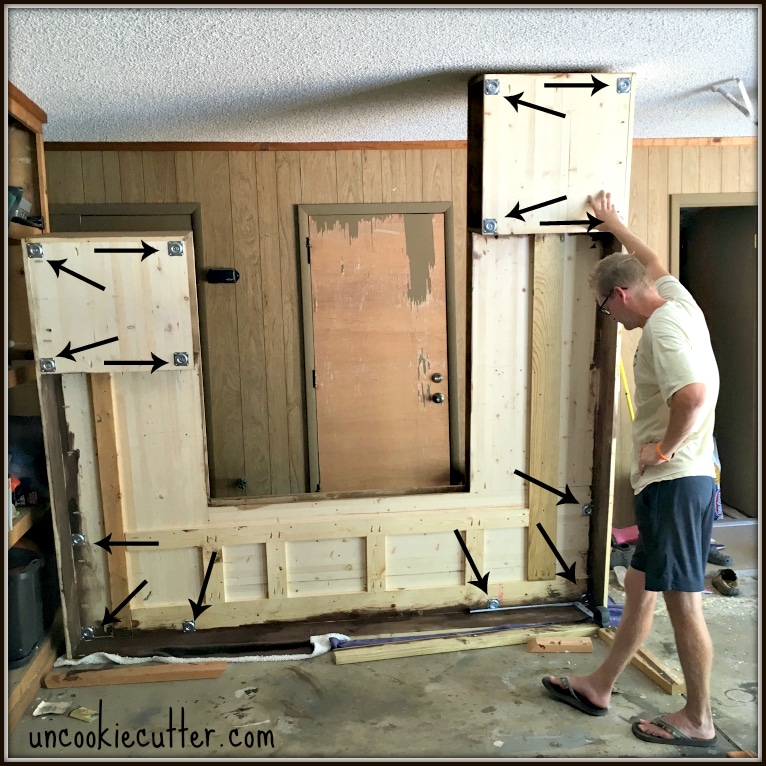 I had to shave the leg parts under the cubby parts down a bit.  I just took the screw out of the legs with some pliers and a towel, cut the legs down and then drilled a new hole, sanded it down and then reattached the screw with a wrench and nut.  To get a similar look to the hairpin legs, I spray painted the legs black and then used a couple of coats of the protective coating. 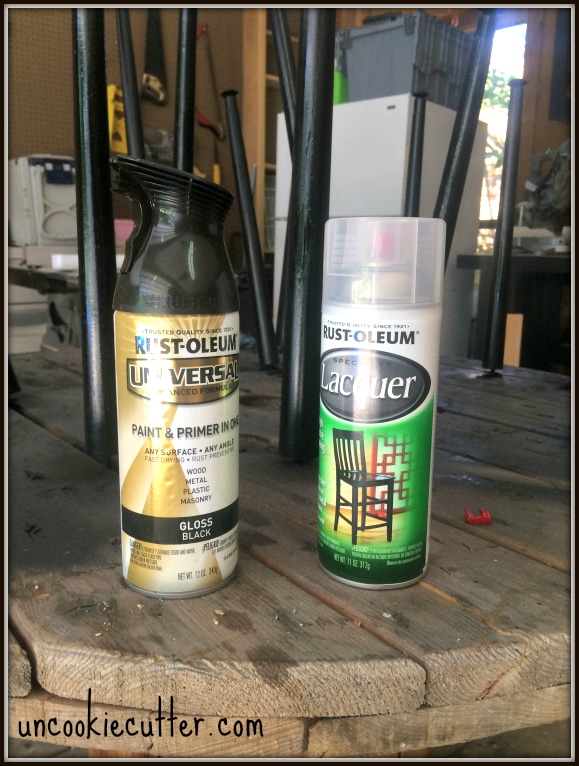 I did have to call in some friends to help move the desk.  It wasn’t too bad to move, but once we got it into the office, I had to attach all the legs and that part was a bit annoying.  The guys had to stand and hold it while I got them all screwed in and leveled off.  Because there is a total of 14 legs, that took a little time than anticipated. 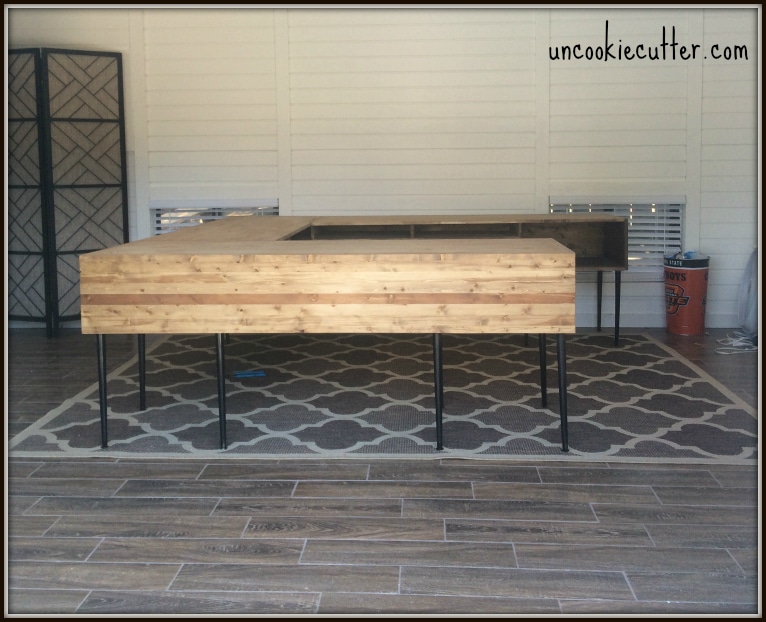 So, I was able to get the stuff my husband wanted out of his new modern desk and the style I wanted.  Success!  And now I’m ready to move out of this office and onto the next room.  Just have to decide what it is going to be. 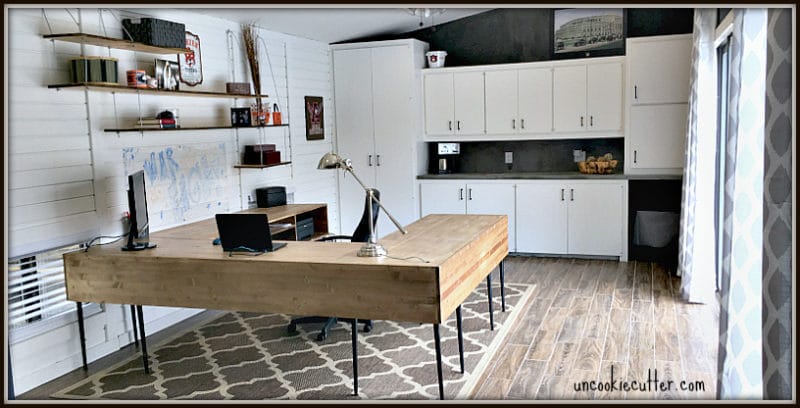 Get all the details on the home office remodel HERE. 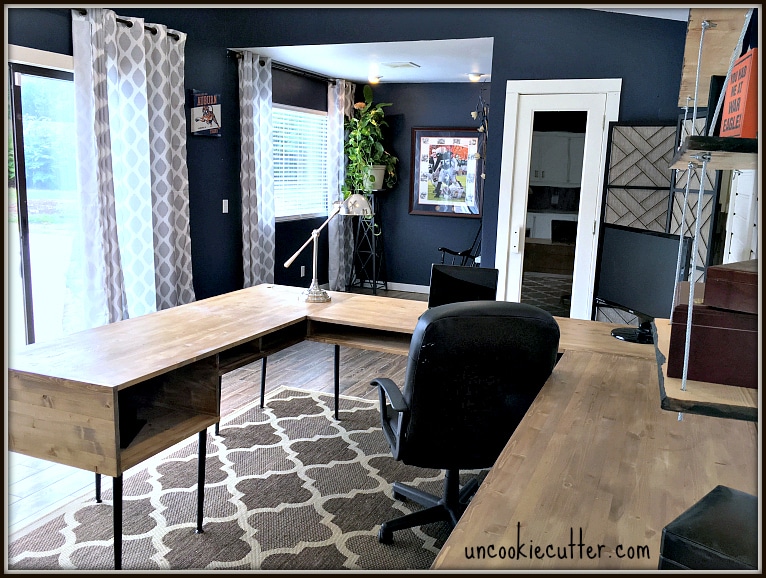 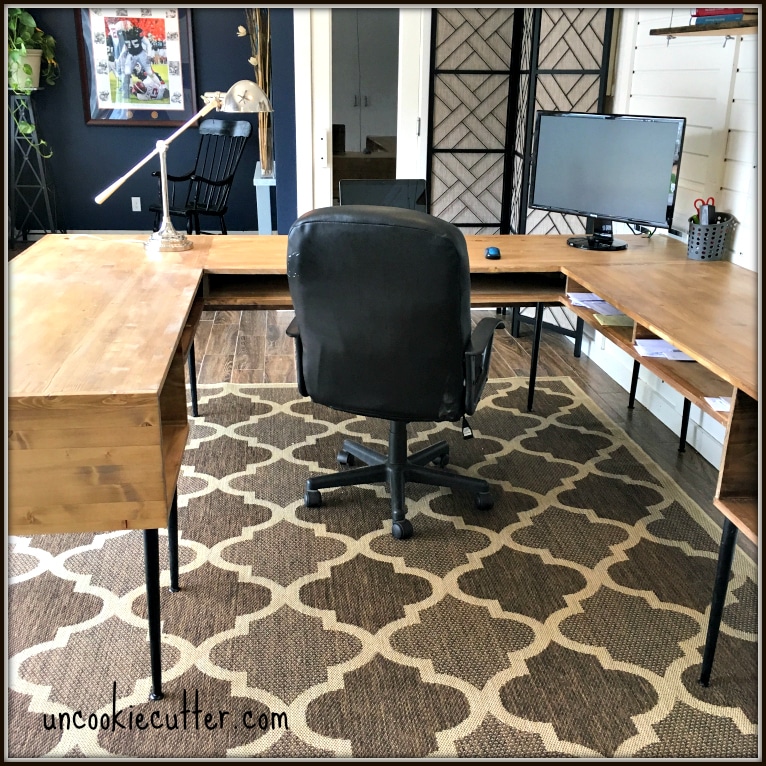 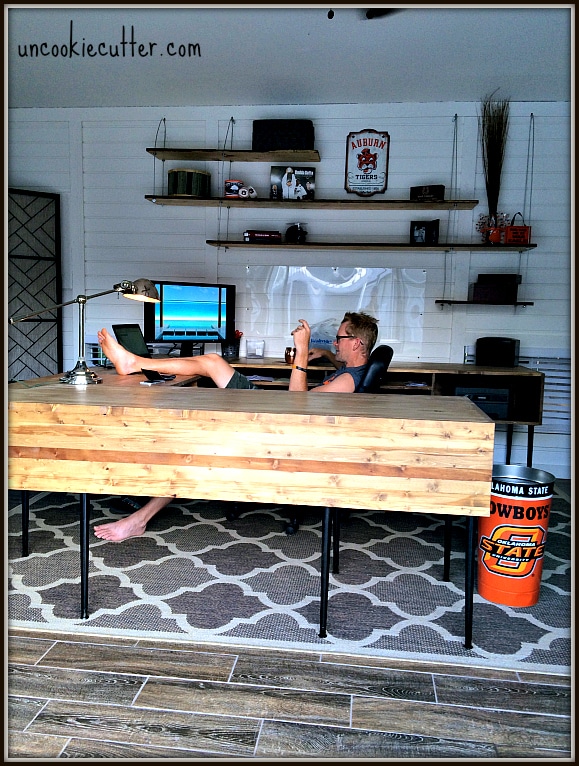 As always, thanks for following along! 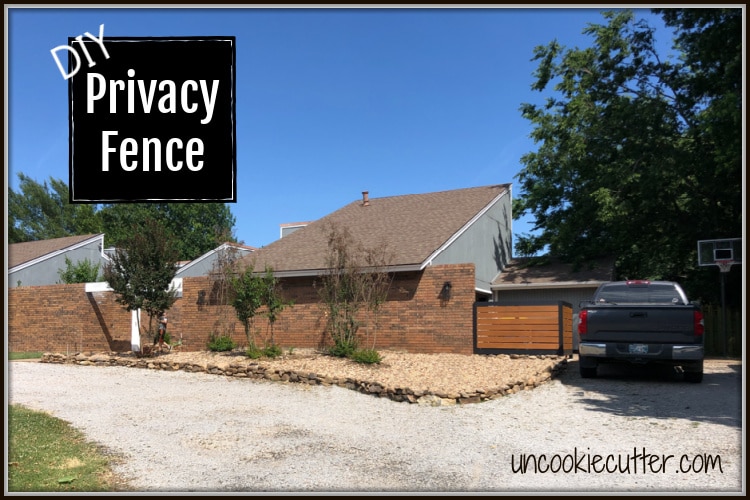 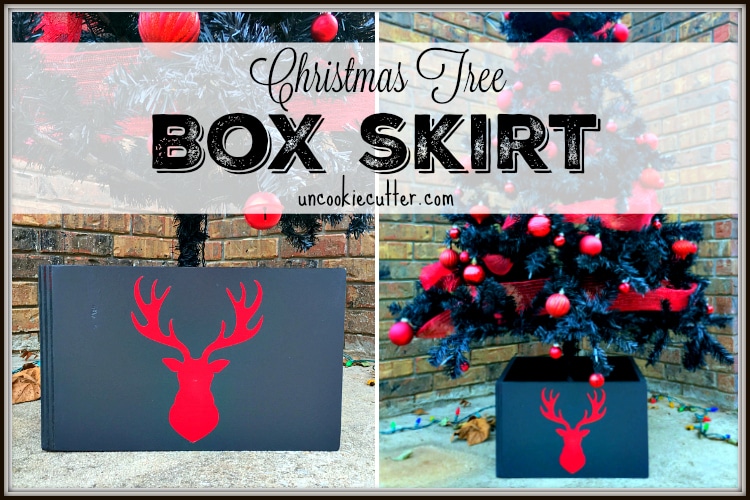 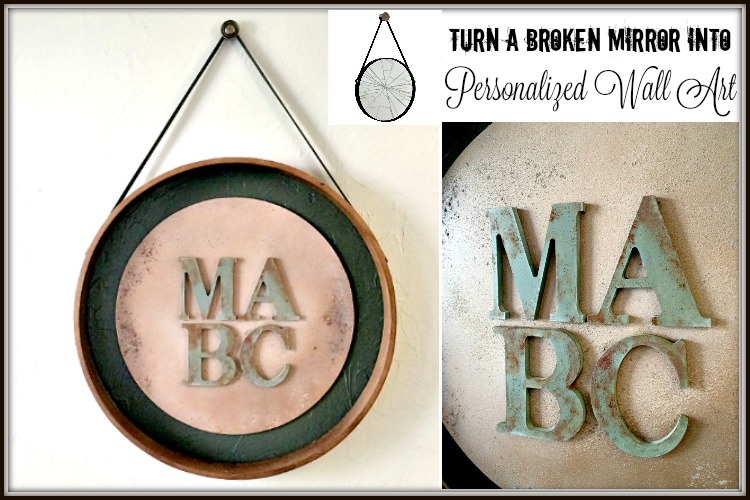 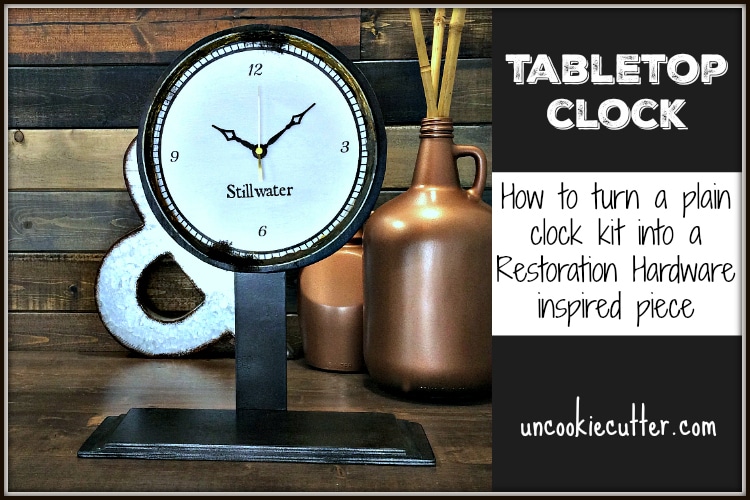 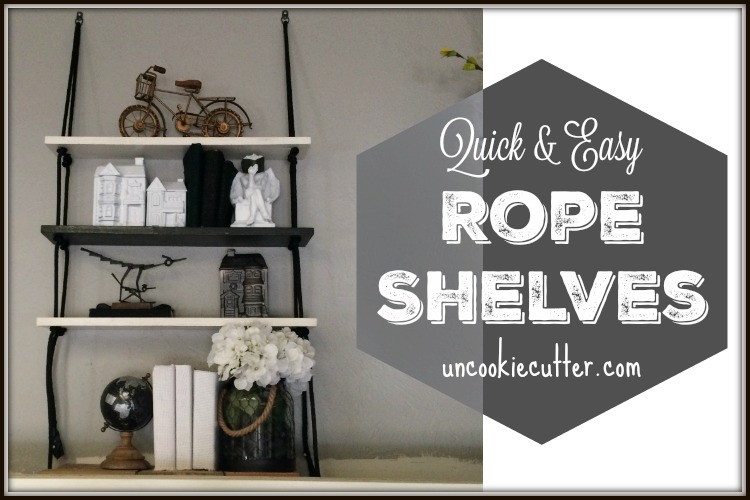 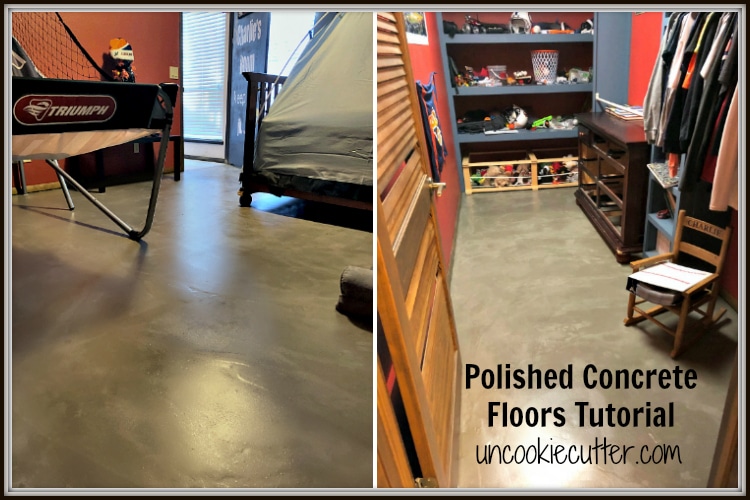